The Utopian language is a language spoken on the island of Utopia located in the Americas.

Utopian pronunciation is similar to Ecclesiastical Latin used by the Roman Catholic Church during the 1500s.

The grammar of the Utopian language seems to be very similar to that of Latin and Greek.

Utopian texts allows us to identify at least three cases for nouns (nominative, accusative, and ablative), and at least two tenses for verbs (present and past). It is likely, however, that Utopian nouns have all six cases found in Latin, and verbs also have a future tense, if not others as well.

The usual word order is Subject-Verb-Object, as in English, and even the Latin of the 1500s.

Utopian is written with the Utopian alphabet. The following table shows Utopian letters with their roman equivalent:

Below is an example of a Utopian quatrain: 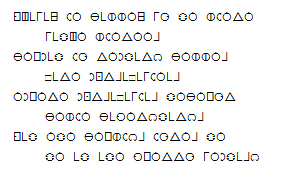 Below is the same verse in Utopian translated into the Latin alphabet.

It is translated literally into Latin as:

This, in turn, is translated into English as follows:

The commander Utopus made me, who was once not an island, into an island. I alone of all nations, without philosophy have portrayed for mortals the philosophical city.
Freely I impart my benefits; not unwillingly I accept whatever is better.

This page uses content from Wikipedia.
The original article was at Utopian language.

This article is a Language-related stub. You can help the Fiction Encyclopedia by expanding it.
Community content is available under CC-BY-SA unless otherwise noted.
Advertisement